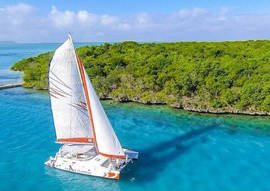 Day 1 ARRIVE IN MAURITIUS | DAY AT LEISURE Mauritius is something beyond an island. It has a rich provincial history, an exceptional biodiversity and ravishing, stunning climate. This is separated from the way that it is honored with a variety of staggering shorelines, terrific coastline and abounding coral reefs. Mauritius has each common luxury that an explorer needs, yet it holds its off-the-beaten-track advance. Upon entry in Mauritius, you will be invited by our agent who will accompany you to your lodging. Registration, unwind and spend the remainder of the day at recreation. Supper will be served in one of the cafés at the inn. After supper, resign to your space for a medium-term remain.

Day 2 SOUTH ISLAND TOUR After breakfast, continue for an entire day voyage through the South Island of Mauritius. Visit Curepipe, a model ship production line, Trou Aux Cerfs the hole of a wiped out spring of gushing lava Proceed for Grand Bassin-Sacred Lake for Hindus in Mauritius and Shiva Temple. Drive through Plaine Champagne and Black River Gorges and visit the 23-shaded Nature Park for a dreamlike encounter . By the day's end, return to the inn, eat and turn in.

Day 3 NORTH ISLAND TOUR After a lackadaisical breakfast continue for an entire day voyage through North Island. Situated in the north Island is the superb city of Port Louis, the capital of Mauritius. It is home to Chap de Mars Racecourse, the second most seasoned racecourse on the planet. We drive to Port Louis for a visit of the capital through the Citadel and its encompassing zone and stop for a visit at Marie Reine De Paix (View Point ). We visit the Champ de Mars race course , present which we continue on Le Caudan Waterfront which has around 170 shops where you can purchase all the Mauritius keepsakes. Our last stop is at Jumbo shopping center in transit back to lodging for 60 minutes. Later in the night, eat at one of the eateries

Day 4 ILE AUX CERFS TOUR Ile Aux Cerfs is most presumably a standout amongst the most wonderful places in Mauritius. It is an emerald shaded tidal pond on the east shoreline of this flawless island. After a generous breakfast at the inn, set out on a journey to its sandy shorelines, excellent tidal pond and a wide exhibit of traveler agreeable shoreline exercises. Nothing beats a dip in the blue waters of the sea. You can wear the snorkel and look at the marine life under the waves. You can likewise appreciate discretionary water sports, for example, banana vessel ride, water skiing, parasailing, cascade visit and undersea stroll at an extra expense. After a thrilling and energizing day, you will be moved back to the inn at night. Later in the night, eat at one of the eateries and remain medium-term at the lodging.

Day 5 DAY AT LEISURE Today, after a healthy breakfast you have the day at recreation to investigate the in-house water sports and exercises being offered by the retreat.

Day 6 CATAMARAN CRUISE Today, have a heartly breakfast Later continue to Catamaran journey. Sailboat is a vessel with two equivalent estimated structures over which lays on a stage. This 42 feet long extravagance vessel will cruise through the quiet waters of tidal ponds giving you a stupendous perspective on the surroundings with the delightful nightfall giving a stunning background. After a loosening up journey, you will be moved back to the inn at night. Later in the night, eat at one of the cafés and remain medium-term at the lodging.

Day 7 Departure to Home This day denotes the finish of a marvelous get-away to Mauritius. Check-out from hotel would be sharp 1200 Afrternoon