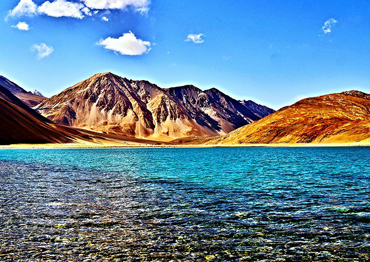 Day 1 Ladakh, We are Here (Arrival in Leh | City Tour) Upon your landing in Leh Kushok Bakula Rinpoche Airport, meet a delegate, who guarantees your smooth exchange to the lodging. Make certain to have pressed comfortable dressing, on the grounds that with an elevation of more than 10000 feet above ocean level the climate is very cold in Ladakh, in any event, during the stature of summers. After breakfast at the inn, rest for quite a while to get accustomed with the high elevation. Later in the early evening, visit the Shanti Stupa, which overwhelms the city's horizon from on a slope. The two-story stupa is decorated with bright and fascinating artistic creations of gods and episodes from Buddhist folklore. The night allows you to stroll around the neighborhood marketplaces and purchase gifts like Buddhist material canvases, called thangkas, pictures of gods, fine-quality pashminas and ornamental painstaking work. Afterward, retreat to the lodging for supper, at that point head to your space for a decent night's rest. Day 2 A Day in Sham Valley (Leh to Sham Valley | Sightseeing) Subsequent to sprucing up today, get going on your touring visit. Your objective for the day is the Sham Valley, which is loaded with interesting spots. Visit the Hall of Fame committed to the Indian troopers. It grandstands weapons and records recuperated from the foe during different wars. A key fascination is the excellent Spituk Monastery, dating to the eleventh century. While here, do see the sculptures of Lord Buddha, and don't miss the all encompassing perspective on the Indus Valley underneath. Next movement to Gurdwara Pathar Sahib, quite possibly the most holy places for Sikhs. It houses a colossal stone, accepted to have been flung at Guru Nanak by an evil presence. At that point the time has come to move to the celebrated Magnetic Hill. It is said that it pulls vehicle upwards when left on unbiased. Day 3 Overcoming Khardung-La (Leh to Nubra Valley through Khardung-La) After breakfast at the inn begin out and about excursion to Nubra Valley. Situated in the extraordinary north of Ladakh, this desert land is recognized for its white sands. Wear adequate comfortable garments as the drive takes you past Khardung La, which at 18380 feet, is supposed to be the most elevated motorable street on earth. As you arrive at the town of Hunder, you are in the valley, known as Ldumra, that implies the valley of blossoms. Subsequent to checking-in at the campground, investigate the sand rises that stretch from Hunder to Diskit along the Nubra and Shyok Rivers. Watch out for the two bumped Bactrian camel that are discovered uniquely in this piece of India and Central Asia. Day 4 Off to Pangong (Excursion to Diskit Monastery | Nubra Valley to Pangong Tso) Imprint this day as the feature of your astonishing excursion as you visit the Diskit Monastery and the Pangong Tso. Appreciate breakfast under a reasonable sky on the waterway bank and afterward travel to Diskit Monastery in the town of a similar name. As you close to the town, you can see the gigantic 106-feet high sculpture of Maitreya Buddha on a slope. The religious community has charming pictures of numerous divinities. Some case that the hand of a devil slaughtered close to the religious community is additionally kept here, all wrinkled and ghostly. From that point proceed with movement to Pangong by means of Shyok town. Rarely travel specialists cover this glorious area in a range of 6 days out traveling to Ladakh. However, you we trust you merit the best and remembering this for our agenda is a stage forward to that. One of the biggest high-elevation lakes on the planet and the most noteworthy salt water lake, the precious stone blue waters of the Pangong Tso Lake faultlessly mirror the earthy colored mountains around making for a truly flawless postcard. You stay at the campground for the evening, under a star-radiant sky. Day 5 Back to Leh (Pangong Tso to Leh through Chang-La | Excursion to Rancho���s School) Wake up to a hypnotizing dawn over the lake, and afterward head back to Leh. In transit, cross the around 17950-feet high Chang La, one of the greatest mountain passes on the planet. En route, visit the Druk White Lotus School, that shot to acclaim with the film '3 Idiots' as the site where the last scene was shot. Subsequent to investigating it and meeting neighborhood understudies, arrive at Leh, where you can invest some energy at recreation. A flavorful supper holds up you at the lodging; from that point, get a decent night's rest in your room. Day 6 The Sojourn Ends (Departure from Leh) Post looking at from the inn, move to the Leh air terminal for your forward flight.